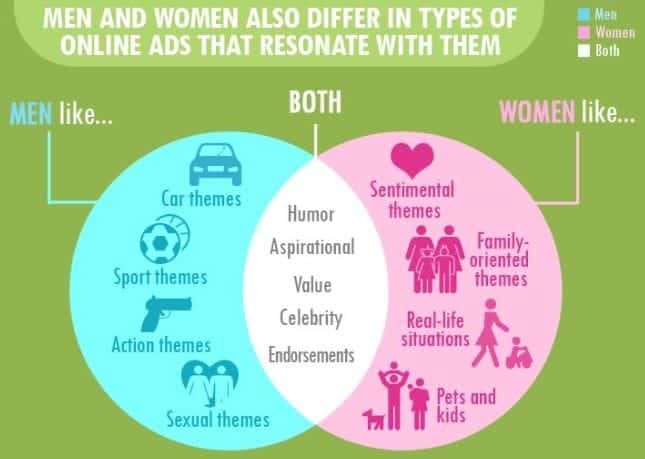 There are roughly 246,700,000 social media users in the US: a population larger than that of Brazil.

Currently, 79% of online adults use social networking sites– nearly double the amount in 2010.  Women make up the majority of social users, leading men 71% to 62%.  Articles such as, “Why Women are the Real Power Behind the Huge Success of Pinterest and Tumblr” have been popping up on the net, sparking a little competition between the sexes.  Do women really have a stronger social presence?  Is it enough to truly control the social web?

Men and women are consistently compared and contrasted, whether it be in terms of mental development, salary, or motor skills.  In a world full of evolving technology and growing online networks, social media use provides another area in which men and women can be juxtaposed.

FinancesOnline.com decided to delve into the differences in the online social habits of men and women, combining research performed by Nielsen, Pew and ExactTarget to uncover differences in:

• Effectiveness of advertising on social

The research conducted not only notes the differences in social habits between men and women, but it also provides insight for marketers trying to reach specific targets.

Women Prove to be More Social

Studies show that females make up a larger percentage of users on Instagram (56 percent vs 43 percent). And on Pinterest, women really dominate, making up 71 percent of all users.

According to research by Pew and Nielsen (see left), part of the reason men and women differ in their social platforms of choice may be influenced by the gratification they seek.  For example, they found that women were more drawn to content-sharing sites where they can keep in touch with friends and entertain themselves while men were interested in networking, both in the professional and romantic sense.

Women turn to social media for a multitude of activities, especially those that revolve around entertainment, self-help, sharing and maintaining relationships.  Women spend their time online uploading and sharing photos, blogging, chatting with friends and looking up “how-to’s” or “DIYs”.   For the most part, women use social media to fulfill personal wants and needs. Men utilize social networking to foster business relationships and to spark love interests.  Nearly twice the number of men compared to women turn to social media for dating (14% versus 7%).

Patterns in social media behavior extend to mobile use as well.  Women mainly use their mobile devices for their cameras, to play games and to chat with friends.  Men’s mobile use is dedicated to using GPS, listening to music, and watching videos.

When it comes to news, men are more likely to seek newspaper sources on their phones.  Women rely on social media as a news source more heavily than men.

Women may have a stronger social presence than men, but what does this mean to marketers?

As depicted by FinancesOnline’s infographic, women are more likely than men to ignore social media ads.  In fact, they are more likely to ignore text and paid digital ads as well.  Women prefer to interact with brands on social sites.  When it comes to brand interaction through social, women seek the overall experience.  Marketers can use this information to target women in a way that will be most receptive: through exclusive content on brand social profiles.  71% of women are willing to “like” a brand on Facebook for deals.  Men, who seek instant gratification, are more likely to scan coupons and QR codes for fast deals and information.

Overall, 35% of Americans believe social media influences their purchase decisions, but less than three in ten use social to follow trends or find product reviews.  These statistics prove word-of-mouth and face-to-face interactions are still prevalent; brands cannot depend on social media alone to push sales.  In fact, a Gallup’s study found that consumers are more likely to turn to friends for recommendations than company-sponsored social profiles.

Similar to how they differ in preferences of type of advertising, men and women also favor different content.  The sexes can agree on funny and celebrity-endorsed ads, but only men want to see fast cars, contact sports and suggestive women in their suggested ads.  The way to a woman’s heart through social advertising revolves around families, pets and kids (Nielsen 2014).

By understanding what needs each gender seeks to satisfy through social media, you can cater your social marketing efforts to meet their wants.  When designing consumer influencer efforts, consider the motivations for each sex. Cater your outreach and your brand experiences to create the most content, sharing, and excitement around your brand.  Remember these key things:

1). Women tend to be more drawn to image-based social platforms and enjoy sharing with friends and family.  Create unique content that’s relevant to your consumers and enjoyable for them to pass along.  Attractive photos, exclusive deals, and conversations around your brand or the lifestyle it entails are likely to generate a buzz.

2). When developing an influencer campaign for men, focus on basic facts about the product.  Men are more likely to look for easy-to-access information.  Men also spend more time watching videos and accessing newspapers on their mobile devices, so YouTube and news sources make great platforms for paid advertisements.

3). Men and women differ in their social media behavior in terms of platform and content preferences, but brands need to remember the golden rule when targeting each: building brand social pages is not enough.  It’s important for brands to interact and spark conversation among consumers in multiple ways because word-of-mouth marketing plays a key role in purchase decisions.

Looking to build advocacy and social proof and generate user-generated content for your brand? Ask us how we can help.

Some statistics and links have been updated since this blog was originally posted.