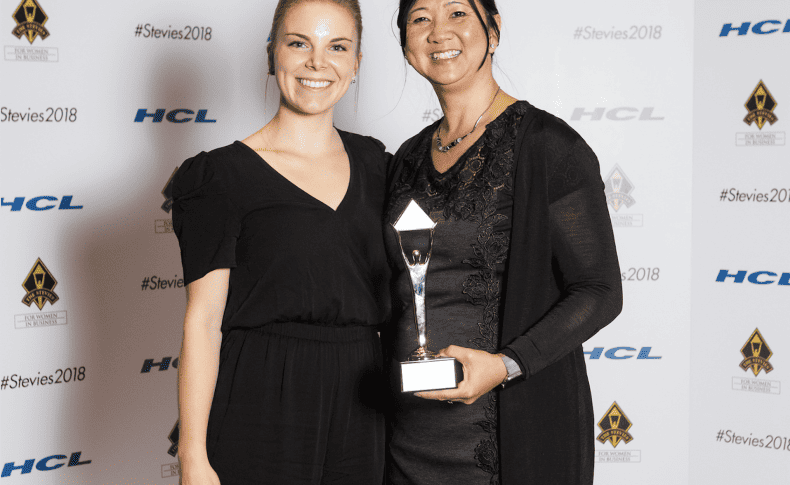 We’re excited to announce our CEO Susan Frech has been named the winner of a Silver Stevie® Award in the category for Women-Run Workplace of the Year (more than 10 employees) in the 15th annual Stevie Awards for Women in Business.

The Stevie Awards for Women in Business honor women executives, entrepreneurs, employees, and the companies they run–worldwide.  The Stevie Awards have been hailed as the world’s premier business awards.

Nicknamed the Stevies for the Greek word for “crowned,” the awards were presented to winners during a dinner event attended by more than 550 people at the Sheraton New York Times Square Hotel in New York City.  More than 1,500 entries were submitted this year for consideration in more than 90 categories, including Executive of the Year, Entrepreneur of the Year, Company of the Year, Startup of the Year, Women Helping Women, and Women Run Workplace of the Year.

In less than ten years, Susan has built a cutting-edge technology that is redefining consumer engagement and the influencer marketing industry. Vesta is a world-class example of a female-founded and run workplace that is continuously innovating its products, as well as the quality of its work environment for employees, contributing to long-term success.

“It is a true accomplishment to be recognized as a finalist for Women-Run Workplace of the Year,” says Susan Frech, CEO of Vesta. “My values are continuously exuded through my work, and to be honored among an amazing group of women is a testament to the success and recognition that women in business deserve.”

Gold, Silver and Bronze Stevie Award winners were determined by the average scores of more than 200 business professionals around the world, working on six juries.

This year’s Stevie Awards for Women in Business was complemented by a new one-day educational and networking event called the Women|Future Conference, also at the Sheraton New York Times Square Hotel on November 16.

“In its 15th year, the Stevie Awards for Women in Business received a record number of nominations. With the new Women|Future Conference preceding the announcement of winners on November 16, it was a day to celebrate the achievements of working women around the world,” said Michael Gallagher, founder and president of the Stevie Awards.  “We congratulate all of this year’s Grand, Gold, Silver and Bronze Stevie Award winners for their achievements.”

Details about the Stevie Awards for Women in Business and the list of Finalists in all categories are available at www.StevieAwards.com/Women.

Check out our podcast, hosted by CEO Susan French, to discover the power of online brand communities in revolutionizing your brand.

Vesta’s CEO Named Campaign US 40 Over 40